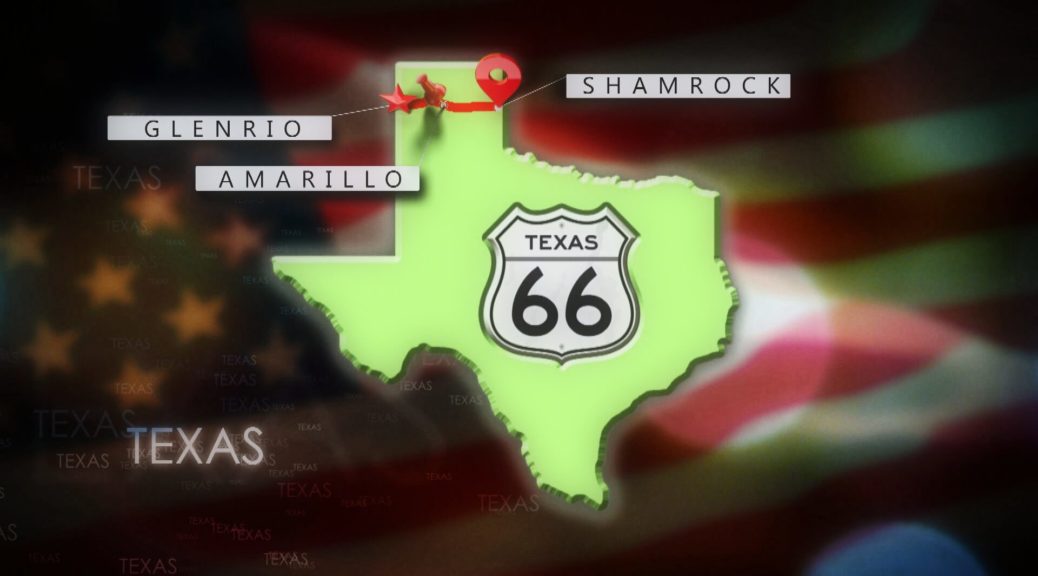 In Texas the “Conoco Tower” awaits me in Shamrock. Once a petrol station and today a tourist stop for fans of the Route 66. The “U-

Dropp In”, as the associated café is called, was shown in the film “Cars” as a workshop.

In Texas I then visit many farms. The Beet Ranch, also known as the Buggy Ranch, the Cadillac Ranch and a little further away, then the Farmer Ranch, or better known as the Combine City, where farmers

have built a counterpart to the Cadillac Ranch. This is where combine harvesters and tractors are placed obliquely in the ground.

In Mc Lean, I visit the largest barbed wire museum in the world and show you the theaters, cinemas and how their stories are related to Route 66.

Along the slanting water tower, called “Britten”, and the largest Christian cross in the Western Hemisphere, where the cross is not only the story of the builder, but also the suffering of Jesus the Lord. A copy of the torch of Turin is also exhibited here.

Of course I’ll go to a certain steak house in Amarillo, and show you the “special offer” of the house, a 2.5 kilos steak, including side dishes. If you eat this in the Big Texan Steakhaus everything in 1 hour, has won the fight, steak against humans and does not have to pay anything.

In Texas, or the Pfannenstil State, as it is called, the geographic center of Route 66 is located. In Adrian, the Midpoint Café is located exactly at 1139 miles from Chicago. Also the Bent Door Café, which

as entrance door has a patterned airplane Tower tower.

Glenrio is another ghost town, right on the border with New Mexico and a reklameschild marks exactly the border. Afterwards, I would like to see gravel roads, if one wants to go on the Historic Route 66.