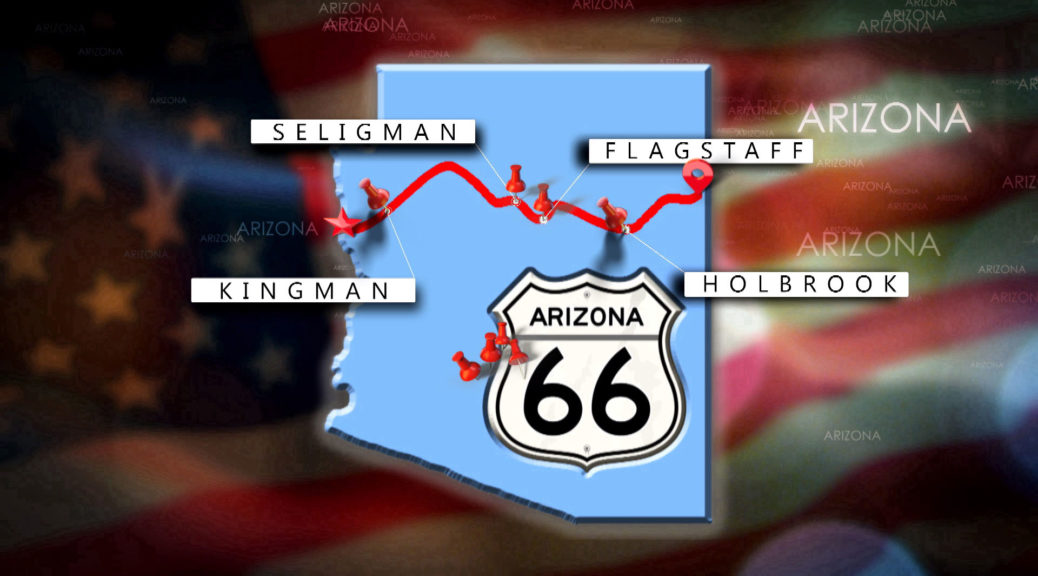 Fort Courage has become known from the television series “F- Troops”. The fort is now only a relic. I am now in the Indian country and that of the dinos. Numerous souvenir shops along Route 66 are the place to go.

I cross the Painted Dessert National Park and see the colored world of the stones, where once the Historic Route 66 once wove through.

In Holbrook, I stay the first time at a Wigwam Motel, visit the Volkswagen factory of Mr. Kesster.

“Geronimo Trading Post” is the name where you can visit the largest petrified wood tree in a parking lot.

“Here it is,” was the most awesome advertising on Route 66 and it worked. They stopped at the sign of the Rabbit Tranding Post in Joseph City to see what they were expecting there. What a yellow wooden sign and a siluette of a black hare does everything.

In Winlow, I’ll show you the most famous corner of Route 66. The Strasseneck was once the Eagles with the song “Take it easy”

A nature play of a special kind awaits me then. The Meteor Crater. The meteorite had a diameter of 50 meters and weighed 300,000 tons, he hit the earth at a speed of 38,000 kilometers. NASA then discovered the Crater, and then trained with Neil Armstrong their first moon landing here.

Two over-arched Indian arrows are a few miles further in the ground, the “Twin Arrows”.

In Flagstaff, Dennis Hopper and Peter Fonda shot several scenes from their film “Easy Rider” and the railroad plays an important role here.

Williams is the last city to defend itself against the bypass of the Interstates, and got three exits from the newly built highway. Really worth seeing and from here the shortest route to the “Grand Canyon” and “Bedrock City” to Wilma and Fred Feuerstein.

After the forces of nature, I will once again rust rustle and visit an Autofriedhof. 40 hectares, only Classic Cars can be found here as well as the film industry has already made some feature films and series there.

Seligmann is then the place that brought Route 66 back to life after its decline. Especially the barber, “Angelo Delgadillo”. I meet him and he tells me his story in the interview, and the most famous chair on Route 66.

Ask Fork, Truxton, Hackberry Springs, Peach Springs, these are places that accompany me on my journey.

Aircraft cemeteries, also called “Boneyards”, are located in Arizona, because the desert heat is so big that nothing can rust. I’ll show you five aircraft cemeteries, military and civilian, their stories and what they are still in use today.

Arrived in Kingman, I visit the “El Travatore Motel” and follow the footsteps of Marylin Monroe before continuing to the desert to the “Sitegrave Pass”.

Oatman is a mining village where there were once many mines. Today it is a tourist stop for fans of donkeys and the Hollywood star Clark Gable. He and Carole Lombard once spent their honeymoon in a hotel room, which one still original equipped, can visit.

Then I come to the border to California and take the TopRock, restaurant with bar and pool, which is located on the border to the sunshine state.