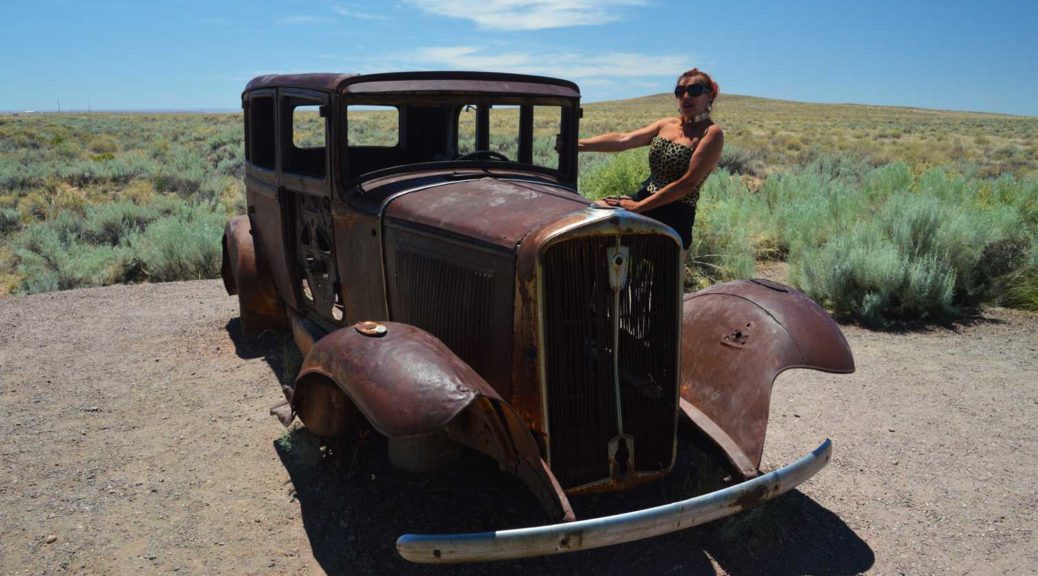 Here are some pictures from Route 66 in Arizona. Show you pictures from a motorbike graveyard, Harley Davidson to Goldwings and also

quarts you will find here aner not only relics of motorcycles but also a lot of shelves of spare parts. I lead you to the White Missile Range, an active army base where a museum is also to be visited. Inside, Ben Burrt, the sound director of the Star Wars film, saves the original helmet of Dart Vader as a thank you because he used the rockets on the terrain to use the sounds as orlage. Trinity Site, the name of the place where the first atomic bomb was fired, is also located in the White Missile Range. In Arizona is also the largest aircraft Boneyard, thus aircraft cemetery of the world. In the desert I also show you Cool Springs, a trading post and film location of the movie Universal Soldier with Jean-Claude Van Damme and Dolph Lundgreen in the main roles. The Hackberry Store, which Bob Waldmire has picked up again from the desert and now is a tourist attraction. The place Seligman was the place where Route 66 was revived after its downfall. Pictures of the most famous chair on route 66. The hairdresser’s shop of Angel Delgadillo and also the first souvenir shop of the revived Route 66. In Arizona there are also many relics of Route 66, historical stretch sections and bridges. The longest well-preserved Route 66 of that time is in Arizona. She also leads through Williams. It is the gateway to the Grand Canyon. Flagstaff is a place on the route where even film scenes of the motorcycle film Easy Rider have been shot. Meteor Crater is the worlds largest impact crater where NASA has trained its first lunar landing. A Lost Places is Meteor City. In Winslow the berühmsteste corner of Route 66 is the Eagles it sang already in the Route 66 song “Take it Easy” Jackrabbit Trading Post, the best idea to advertise on a street. “Here it is” The Volkswagen work of the Lord Kester in Holbrook makes VW heart beat faster. Staying at a Wigwam Motel in Holbrook you should be able to. In dinosaur country I then meet Stewards Steinfabrik. Painted dessert is a national park where one of the original historic Route 66 passed through. Two guns a ghost village where the story is still waiting for you. Mounton Lions was a pet park for travelers. The Air Space Museum shows a large exhibition of famous aircraft. Top Gun star Tom Cruse has parked his film fan. The underground rocket silo Titan 2 can also be found here. Oatman in the desert is a goldgrass village where also Clark Gable and Carole Lombard spent their honeymoon. Directly on Route 66